What You Need to Know About Zika 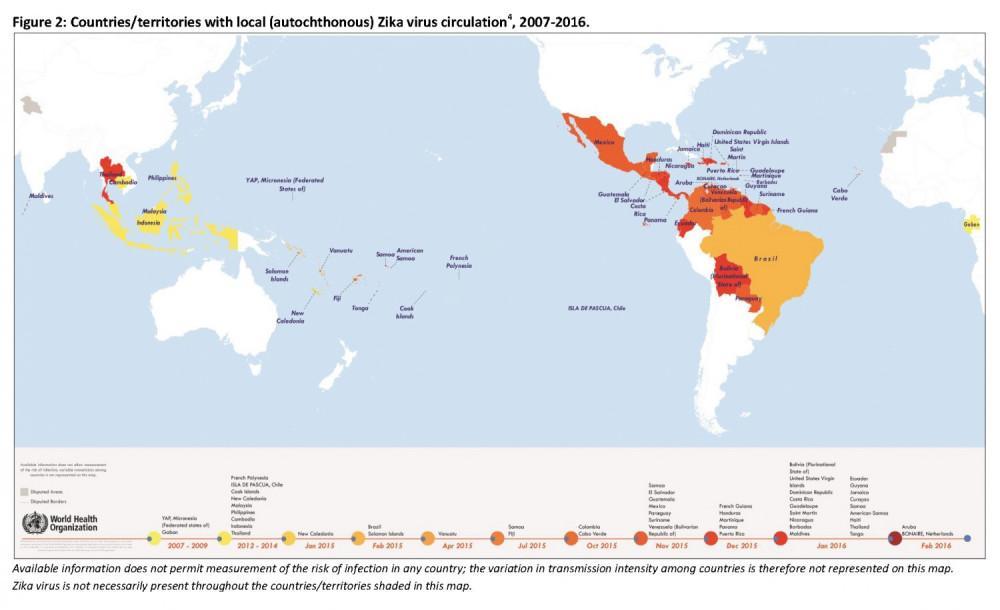 Zika virus infection, transmitted by Aedes mosquitoes, is caused by a flavivirus closely related to dengue, West Nile virus, and Japanese encephalitis. Infection is symptomatic in approximately 1 of 5 cases; when symptomatic, infection usually presents as an influenza-like syndrome and is often mistaken for dengue or chikungunya. Because of cross-reaction in commonly used dengue antibody tests, until recently Zika was likely often misdiagnosed as mild dengue infection. With more frequent utilization of modern pan-flavivirus molecular screening in reference laboratory settings, characterization of Zika virus infection previously mistaken for dengue has enhanced understanding of the expanding geographic range and manifestations of this infection.

Humans and non-human primates are likely the main reservoirs of the virus, and anthroponotic (human-to-vector-to-human) transmission occurs during outbreaks such as is currently occurring in the Americas. Aedes aegypti is the most important vector to humans; Aedes albopictus and Aedes hensilii have been identified as potential vectors.

Transfusion-derived, placental, and perinatal transmission of Zika virus have been demonstrated, but frequency is unknown.

Sexual transmission occurs uncommonly, but frequency is unknown. Sexual transmission of Zika virus from infected women to their sex partners has not been reported. Reported experience is limited to 3 cases in which men developed symptomatic illness. In the most recent case, the exact circumstances of a confirmed sexual transmission from a male to an unknown partner in Dallas, U.S. in February 2016 are unclear at present. In 1 case, Zika virus RNA was detected in semen 62 days after onset of febrile illness.

The incubation period is 3-12 days. Current data indicate that virus is present in blood for a maximum 1 week. The majority of cases present with fever, headache, malaise, maculopapular rash, arthralgia, myalgia, and conjunctivitis. Other non-specific features are less common. The self-limited illness with symptoms lasting 2-7 days is almost always mild without serious forms (such as with dengue) and without long-term arthritic sequelae (such as with chikungunya). Hemorrhagic fever has not been reported in Zika infection. Nevertheless, in the early stages of the disease, Zika is indistinguishable from dengue and chikungunya, which often coexist in the same locations.

Insect precautions and personal protection measures against day-biting mosquitoes are the main prevention strategy, especially for pregnant women who choose to travel to affected areas. Of importance in terms of prevention, Aedes mosquitoes, unlike malaria-transmitting Anopheles, are daytime feeders, with 2 peaks of biting activity during the day: the first 2-3 hours after dawn and the mid-to-late afternoon hours. This pattern, however, turns to one of all-day activity indoors or during overcast days. In risk areas, travelers (especially pregnant travelers) should be especially vigilant in applying repellent during daytime hours, particularly during peak biting times (early morning hours and late afternoon). Insect repellents containing DEET and picaridin are considered safe during all trimesters of pregnancy.

Containers with stagnant water can serve as breeding sites for Aedes mosquitoes, and travelers should be instructed to empty them or remove them from the proximity of human habitations whenever possible.

National authorities are defining individual policies on the period of time after travel to Zika-affected countries during which blood or organ donation will be forbidden. WHO’s recommended blood donation deferral period is 28 days for those who:

In Zika affected areas, donors with confirmed recent Zika virus infection and donors with a recent clinical history consistent with Zika virus disease should be deferred from donating blood for 28 days following symptom resolution. Sexual partners of men with confirmed or suspected Zika virus infection in the last three months should be deferred for 28 days after their last sexual contact. PCR-based screening of blood donations for presence of Zika virus is not available in any country. Existing viral inactivation technologies are not effective against Zika virus in donated whole blood or red blood cells.

Sexual transmission of Zika virus appears rare at present, but all authorities are advocating a very cautious approach. Male condom use for 1-2 months after risk travel with no compatible symptoms, for 6 months following recovery from laboratory confirmed infection, and for the duration of pregnancy when the female partner is pregnant is recommended. Symptomatic travelers should ideally abstain from sex pending test results and seek expert advice if Zika infection is proven.

Current understanding is that, if infected, Zika virus usually remains in the blood of an infected person for about a week. The virus will not cause infection in a baby that is conceived after the virus is cleared from the blood. A cautious approach would be to delay pregnancy for 1-2 months after risk travel.

Zika virus RNA but not live virus has been detected in breast milk, and no Zika cases from breastfeeding have been reported.

No vaccine candidates were in active development until recent weeks. A usable vaccine is not on the immediate horizon.

Travel and trade advisories to countries with a current Zika outbreak have been left to national authorities by WHO.